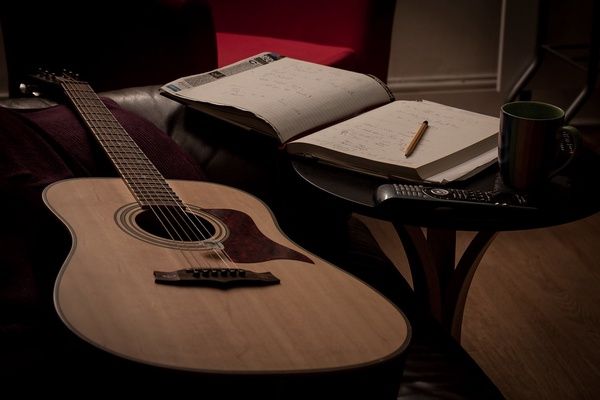 This is the way writing songs goes for me. I wake up in the morning and there is a song in my head. I can hear it like it is on the radio. Chords, lyrics, melody, structure, and even the key are all there but distant and vague. I can’t just write it down in one shot. I don’t even know how to describe it. I can only use the analogy of a jigsaw puzzle. What I hear is the picture on the cover of the box. What I have to work with is 1000 pieces of fragments that I write down on pieces of paper and stuff into my pockets or send to myself in five-word e-mails.

Songwriting for me is the process of gathering all of those fragments together and piecing them together until they become the song that I hear in my head. There is no creativity involved. The majority of my time is spent in the process of trial and error. It is exciting because I have a goal in mind and each time I try something I may get a step closer, which brings its own drama and mini rewards. The process can take hours, days, weeks, months, or years depending on the song.

When I’m “finished,” there is always great excitement to play it for the rest of the band. Good news I can’t wait to share. But, it is also makes me anxious, embarrassed, and shameful. What if the song isn’t any good? What if the other guys don’t like it? Am I wasting their time?

Since the other guys in the band have always been 100% supportive, patient, and helpful with my songs, those anxieties aren’t based in reality. If fact, I’ve come to see my “songs” as pizza crust waiting for the rest of the band to provide the sauce and toppings. Their contributions are what brings the songs to life.

As for the anxiety, shame, etc.., the best that I can figure is that those emotions are a protective mechanism, a reminder that a song is something sacred, something special. It isn’t an e-mail or a grocery list. It is a piece of art deserving respect. If anything, I’m just a messenger transporting the song from one place to the next. Ignoring a song that came to me would be like a sin of omission. Religious terminology is necessary because those are the only terms that we have to describe areas out of the reach of our understanding. It is a mystery.

So check this out. Friday morning, I wake up with a song in my head. I started taking notes and sending myself e-mails. It was a busy day, and I didn’t have time to sit down until 10:00 p.m. to work on it. I set myself up at the kitchen table – laptop, notebook, pen, pencil, rhyming dictionary, notes that had been stuffed in my pocket, and my guitar, of course. Then James comes in for his evening snack.

Me: Yes, it has been in my head all day.

James: You know, you should really write a song like [mentions the name of a band.]

I then proceeded to play a riff, verse, chorus, bridge, outro beginning to end.

James: Is that a real song or did you just make it up?

I ignored his question and started writing the lyrics. Twenty minutes later I had “Lonely Driver.”

Fragments of the song I started to work on are still floating in my inbox waiting for another block of time. What will become of “Lonely Driver” is mostly out of my control. Hopefully I can show it to the band on Wednesday, and we can record it at some point. Maybe it will be a big hit in Australia. Maybe it will be the second to last cut on our next album. Maybe it will just be another page in my notebook.

I will say that not having all the answers keeps things interesting.