On the Hypnotic Sound of The Vulgar Boatmen 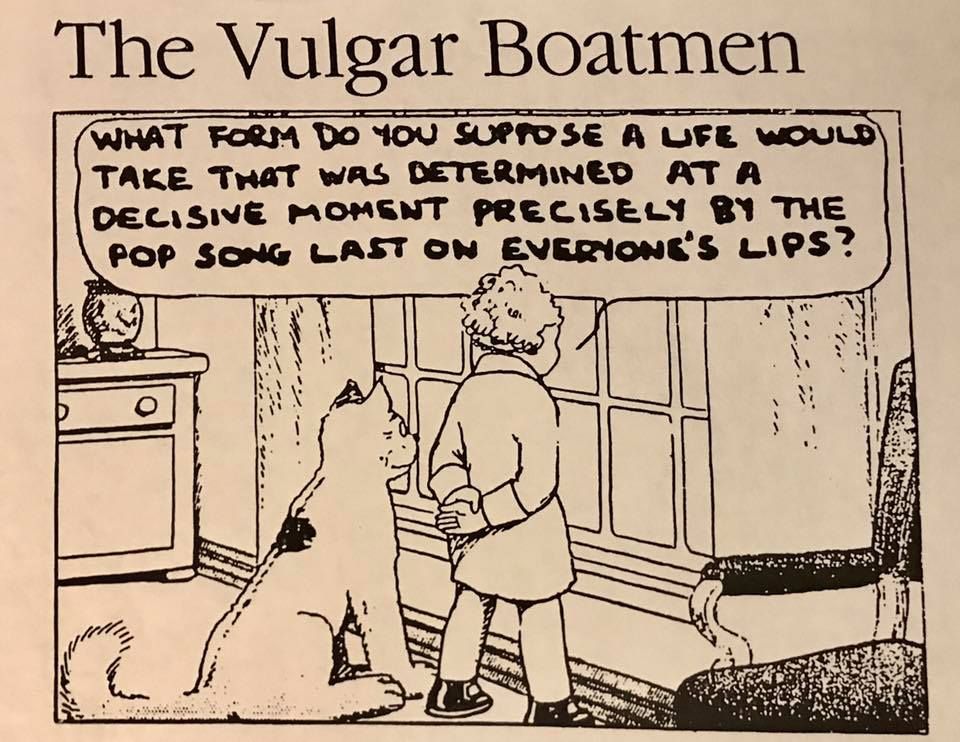 An image borrowed from The Vulgar Boatmen Facebook Page. Not sure of the origin. It fits the theme of the post.

A word that I often hear people use to describe the Boatmen’s sound is “hypnotic.” I’ve also heard “trance” and “drone.” As for the last two, I’d have to say with all due respect, “What?” I listen to The Beatles, and I’m hip to Richard Rogers. I like melodies. My favorite band shall not be described as “trance” or “drone.” The Philip Glass and Terry Riley albums I’ve heard were checked out of the library and quickly checked back in.

“Hypnotic” I can understand. I hear it this way. Every element in the arrangement of a Vulgar Boatmen song is at the service of the tune like the elements in a painting. Every guitar part, drum hit, harmony note is in itself carefully rehearsed and recorded. By itself, it sounds good. Also, all of the elements are arranged in proper proportion to each other. The end result is that there are no distractions to take your attention away from the tune. There is nothing to pull you away from the beauty of the song. There are no “look at me” instrumental solos or high drama drum fills. Even the drama in the lyrics occurs “off stage.” As a wise man once said, there is something happening, but you don’t know what it is. You don’t have an old woman getting mauled by a bull in the third verse that starts you wondering about your own mortality.

I think that is why some people can hear the Boatmen and say “whatever” while others are totally taken. To get it, you need to be primed to hear the craftsmanship behind it.

I’m either burying my lead or showing my lack of training/experience as the moderator of Vulgar Boatmen Awareness Month, but I think that craftsmanship is the whole point. There is a myth that some people are “geniuses” and great music just flows out of them. Whatever poor behaviors they exhibit are further evidence of their “specialness.” Special talents need to be developed and practiced.

Writing a great song and recording it is a lot of work. Writing enough great songs for an album where they all work together yet remain distinctive is even more work. It is humble work. Practicing your parts over and over. Trying a song in different keys, using a capo, testing different tempos all takes time. And when you have recorded ten different takes sometimes something happens. You see the song going off in a new direction. You realize the song is almost writing itself finding its own form. A craftsman recognizes this. It is the realm in which they operate.

I don’t know why craft never comes up when talking about music. The guy that works on my car has been doing it for 30 years. He is beyond a car nerd. I would never take my car to anyone else. If I took my car to another place and the guys said, “I need about four beers in me before I can work on a transmission,” I’m out of there.

When I started writing, I didn’t think I’d being going on about the value of work, and here it is Labor Day. Sometimes the song writes itself.