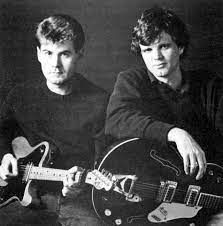 Vulgar Boatmen Awareness Month began as Vulgar Boatmen appreciation day, September 23rd, with an e-mail to some old bandmates as a funny excuse to stay in touch. With my “modernization” last year, my wife set-up a Facebook page for me, I thought, “What would happen if I posted about The Vulgar Boatmen everyday leading up to The 23rd of September?”

I got to connect with a lot of people, in an online way. I got to tell Dale Lawrence, Robert Ray, and Kathy Kolata, “Hey, I love your band. Thank you,” which sounds silly and awkward, but I’m glad I said it, and they got to hear it and were appreciative.

Last year I said the point of Vulgar Boatmen Awareness Month was, “to highlight the fact that our language has difficulty communicating that a band can be qualitatively better than 99% of the other bands and deserve greater attention.” Gag. Sometimes I wish someone would take me keyboard away from me.

The bottom line is that if you are going to try to post for 23 straight days you better have a lot to say. I can talk about The Vulgar Boatmen, a lot, and it isn’t like The Beatles where there are libraries of books about them already. So VB Awareness Months is now a thing, and I have to actually thing about it.

Like Dante, “Midway along the journey of our life/I woke to find myself in a dark wood,/for I had wandered off from the straight path.” Then I ran into Virgil, actually Tim Hinley who was posting about The Vulgar Boatmen on Facebook. Reading his daily posts on DaggerZine for the last nine months, he has been my guide through the Divine Comedy of popular music.

Vulgar Boatmen Awareness month is about people who reference Dante but haven’t read the Divine Comedy all the way through, even though they have started it several times and intend to read it at some point, maybe during a pandemic.

Actually, it is about artists who make the guitar pop of The Beatles their form or canvass and try to push it forward in the same way that James Joyce pushed fiction and Ingmar Bergman pushed film. Rock and roll as an artistic vocation as opposed to only being a means to getting paid or rhymes with “paid.”

Which brings me to the biggest change since the last VB Awareness Month: I discovered The Go-Betweens.

Every time I listen to them, James says, “It is so funny that it took you 50 years to find your ideal band. The Go-Betweens have everything that you love about music.” Kids have a way of getting right to the point. I say, “Wait a minute. The Band and The Vulgar Boatmen are still my two all-time favorite groups.” And, “Don’t let Dale Lawrence hear you say that,” as if I was committing music adultery.

I cannot lie. I love The Go-Betweens.

Second of all, reading Robert Forster’s book, Grant and I, answered my question, "Does anybody else think about rock and roll bands the way I do?" Just by listening to a band you can assume certain things about the way they think, but to see it spelled out in well-written prose made me feel all validated inside. (Robert Forster and Grant McLennan were the two singer songwriters in The Go-Betweens. Sometimes I get ahead of myself.)

If I was a scholar, I could ask if Robert Ray and Dale Lawrence listened to the early Go-Betweens records. But I don’t think that showing cause and effect is necessary. If you are into literature, film, and rock and roll, eventually those things are going to come together and you start asking, “What if?”

I rest my case. If there are people in Australia, Indiana, Florida, and me thinking the same way, it is a movement, no matter how microscopic. And if the models are Joyce and Bergman, I shouldn’t expect blockbuster level attention.