The Unknown Legacy of a Musician - Frank Zanks 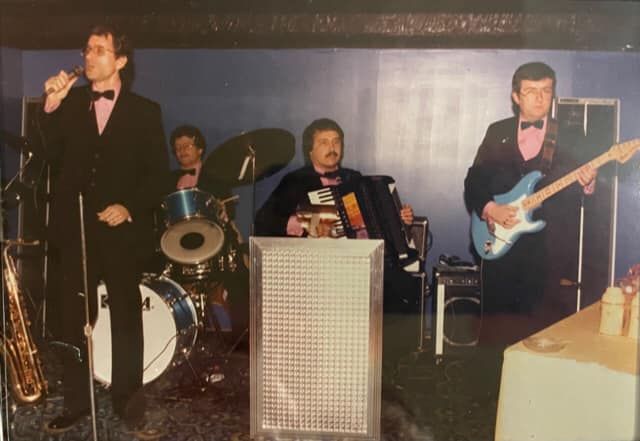 Above: The Midnight Quartet: Frank Zanks on guitar on the far right.

I’m reposting the following reflection written by my old friend John Oleniacz about Frank Zanks. All of us are from the small town of Hampton, NJ. It captures all that is beautiful about music – to have a music vocation.  You have the obligation to play your instrument well, entertain others, and pass that along to the next generation. That is what Frank did, and that subject has been on my mind a lot recently.

John’s piece means a lot to me for a number of reasons. What he describes below, he also told me play-by-play on the bus on the way to school. I hung on every word – music junky that I am. Also, I went to the same church as Frank, I must have seen him hundreds of times, but I don’t remember ever meeting him. A quirk of small town life. Then there is the multi-generational aspect of music and how the Midnight Quarter fostered that with John. Father and son sharing a stage. I remember how much it meant to John. None of the other kids could say that.

Most people know I play a number of instruments, but the accordion was where I started at age 9.  Both of my parents played accordion in bands years ago.  Sadly, I never got to see my mom with a group - I’ve only heard stories.  But my dad played in wedding bands throughout my childhood, and so began my desire to play in my own group someday.

Some of you are aware that Frank Zanks passed away recently.  Frank was the leader & guitarist for the Midnight Quartet, in which my dad covered the keyboard and bass roles by way of the accordion.  I got to thinking this week of the experience I gained during my mid-teens by tagging along on their gigs.  I started out by sitting to the side and listening to them.  While I was familiar with a handful of “standards” from music lessons, or listening to or playing along with my mom (who always fascinated me when she played a counter line to my melody - a skill I still can’t master to this day), or from listening to old “home” recordings she gave to me, I was introduced to quite a few more from the sidelines at dad’s gigs.  Eventually, I assembled my own “fake book” from the myriad of sheet music Frank had - a book I still play from today.

When I learned enough tunes, I started to play solo during their breaks, which eventually earned me a few solo gigs of my own.  It was the first band I ever sat in with.  It’s where I learned to lay back and play rhythm rather than melody behind a vocal or a sax or guitar solo.  It’s where I fell in love with the sound of a sax in a band.  It’s likely how I met Walt Bibinger who sometimes sat in for Frank when he couldn’t make a gig.  (I later studied guitar with Walt, who among other things broadened my knowledge of jazz standards, some of which weaved their way into my fake book.)

At 16, I had most of their repertoire down and could cover weddings and banquets with the group when my dad couldn’t make a gig.  I eventually developed a repertoire of rock tunes which allowed me to team up with Bam Bridge and Tom TC Carpenter to form our first band.  When the drummer was looking to sell his old kit, my dad bought it for me, and I taught myself how to play.  Within a few months I was sitting in on drums with the group and found myself behind the kit in the pit orchestra for the spring musical in high school, which eventually and somewhat obliquely introduced me to Tom Nelson.  The list of influences, connections, experiences and memories goes on.  I’m grateful that the group made me feel welcome, and were tolerant whenever I hit a few clunkers or played a little too loud.  So here’s a few tunes that you normally would have heard in their first set - “As Long As He Needs Me” and “Who Can I Turn To”.  Many thanks to John, Charlie, Dad and Frank, may he Rest In Peace.