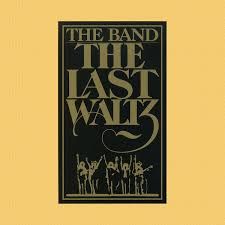 Once in a while something happens that may not have happened if things were normal, like Ryan renting a theater for a band and close friends only viewing of The Last Waltz.

My favorite movie. The most influential piece of art on my whole life. I finally go to see it on the big screen, and it was way better than I imagined. And I have seen it at least 50 times.

However, I started off in know-it-all mode. Saying the lines ahead of the movie. “Good evening.” “Happy Thanksgiving.” Then I was just mesmerized. The next thing I knew they were singing “I Shall Be Released,” and I was thinking, “No. Stop. This is over too quickly.” I could have sat and watched it again. There were so many details to see. You could even look up Neil Young’s nose if you dared. What was the fiddle doing on the piano. Clapton played through the same Music Man amp that I have!

Maybe it was the sound system or the mix, but Levon Helm stole the show for me. I turned to James, “Levon is a fill machine.” I’ve been listening to The Band for over 35 years. How did I not notice that Levon Helm is the greatest drummer ever?

On the way home James and I were talking and I was explaining my reservations about Robbie Robertson and he said, “but Dad, clearly Robbie is the smartest, most talented, and charismatic guy of the whole group.”

One of the things I enjoy about being a dad is losing arguments to my highly opinionated (and highly observant) children. They don’t mind challenging me.

It is easy to try to be too smart. Being raised with MTV, I have a certain skepticism about everything on screen because it can be manipulated, but Martin Scorsese isn’t manipulating Robbie into the star of The Last Waltz. This is someone who won over Ronnie Hawkins at the age of 15, Bob Dylan at 21, Scorsese at 33, and Joshua Tree era U2 at 43.  The members of The Band were the cream of the crop, but Robbie was the star of stars. I’m a little ticked at Levon for the damage he has done to Robbie’s reputation. We all have our flaws. Could Levon be guilty of a little bit of envy?

I’ve mentioned that I threw Robbie’s autobiography in the garbage. The only book I’ve ever thrown in the garbage. Call me a Puritan, but I thought there was too much gratuitous sex…but mostly drugs. I don’t know why Robbie had to document every person he ever smoked a joint with. Actually, I do know why. That is probably what the publisher wanted, and it was a way to absolve himself from responsibility of the The Band’s break-up. Everyone was on drugs at the time. Wow. Who knew? That story isn’t new. Noah got himself in trouble when he had too many glasses of wine after the flood.

But you’re Robbie Robertson! One of the most gifted minds in the history of rock and roll. Leave the drug tales to the mediocre looking to make a buck. I want to know what YOU are thinking. But that's me.